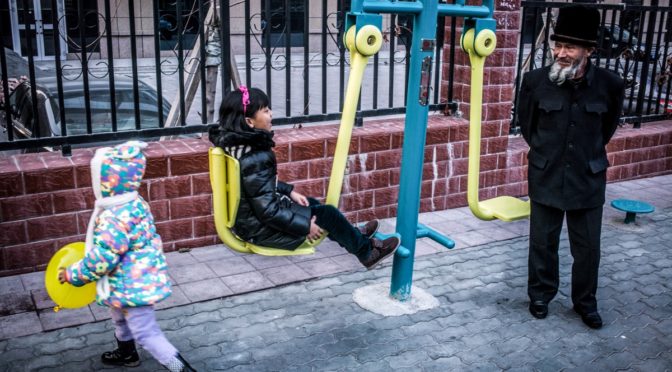 By Darren Byler, with images by Nicola Zolin
(Originally posted on October 30, 2017: reposted here with permission from Youth Circulations)

This is the first of a two-part series by Darren Byler, who with photographers Nicola Zolin and Eleanor Moseman, powerfully document how the bodies of migrants are marked, just as their communities are erased, in the often unconsidered spaces of China’s “People’s War on Terror.”

In May 2014 the Chinese state declared a “People’s War on Terror.” This war was directed at what was perceived to be the Islamic “extremism” of young Uyghur men and women. Uyghurs are a Turkic Muslim minority group that is indigenous to Chinese Central Asia, or what in colonial terms is referred to as “the New Dominion” (Xinjiang). This vast area of the nation, whose borders stretch from Tibet to Afghanistan to Mongolia, is the source of nearly 20 percent of China’s oil and natural gas. It is also a central node on China’s New Silk Road initiative, which seeks to expand China’s influence throughout Western Asia. Increasingly the eleven million Uyghurs who call the southern part of this region their homeland are seen as an obstacle in China’s vision of the future.

The new “People’s War” was a response to forms of Uyghur resistance to the Chinese state. Some of these acts of resistance were violent attacks on police and Han settlers, but the vast majority were simply protests over land-seizures, discrimination, arrests without due-process and police shootings. Before the “war” began, one of the primary ways that young Uyghurs resisted the increasing control of the state was by moving. Hundreds of thousands left their rural villages where policing is very intense and job opportunities are rare. They came to the capital city of the region, Ürümchi, in search of urban freedom and the promise of a better life.