I would like to share some helpful information. For the last few years, I have relied heavily on the services of an editor to “clean up” my prose and to organize formatting, citations, references, indexing and the like. Jennifer Delliskave—a former student—has edited three books and, roughly, eight articles/chapters for me. She has spared me 100s of hours of proofing and editing—tasks which aren’t among my favorites. One consequence is that Jennifer is extremely well versed in academic editing, especially in the anthropology of childhood and youth field. END_OF_DOCUMENT_TOKEN_TO_BE_REPLACED 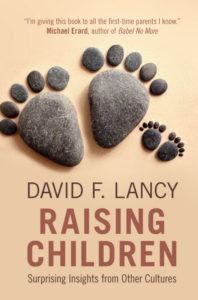 The genesis for this book was a growing acknowledgement that the experience of childhood in modern, upper-echelon society looks drastically different from both historical and cross-cultural antecedents. Anthropologists studying childhood find a great range of “normal” childhood experiences that, nevertheless, might be considered highly unorthodox—even harmful—by current “informed” parents and professionals. Raising Children uses insights drawn from the anthropology of childhood to serve as a lens to critically examine contemporary childhood.

END_OF_DOCUMENT_TOKEN_TO_BE_REPLACED

The question of “having it all” has long plagued parents (mothers in particular), becoming increasingly salient as parenting, work, and education opportunities conflict. Student parents are forced to navigate a difficult balance between academic and parental responsibilities in university institutions that are not designed for their needs. This matrix of competing demands necessitates a negotiation of labor divisions at home, but in our study of post-bac Yale parents, parental responsibilities are (no surprise!) unduly placed on women. So, in a society where more mothers are entering/re-entering the workforce after pregnancy and the attitudes of parents about home and workforce roles have become increasingly progressive in recent decades, can parents really have it all? Our small study suggests no, as our female participants still bear the brunt of childcare—a trend echoed for household labor in larger research studies. To better understand this continued gender imbalance, as well as the demands faced by student-parents regarding “fair” time/labor-allocation, money, and social connection, we examined the specific challenges faced by Yale University graduate and professional (Law and Medical school) school parents and how these challenges influence their childcare practices.

Respondents voiced many student-parent challenges: moving away from family and friends to attend school, diminishing support networks that alleviate childcare responsibilities; navigating financial pressures of financing school and childcare while subsisting on a small salary/stipend. But the biggest challenge of all? Resoundingly: time allocation—respondents simply did not have enough time to be both students and parents. Partnered respondents expressed that it would have been almost impossible to parent alone, and the two single respondents confirmed the difficulty of single parenting as a student, voicing frustration that the university had few resources and programs to support them. One single mother explained that, despite Yale’s purported commitment to diversity, single parents aren’t set up for success here, saying, “I don’t know anyone else here with an older kid, let alone a single parent grad student. I sound bitter…. I am. It says something about who gets into Yale and who doesn’t and I’ve often felt extremely alone here because of the uniqueness of my situation.”

Even partnered parents said that parenting in graduate school could be incredibly isolating, when most students fresh out of college life are forming close bonds with their childless peers with no associated parenting limitations.

With respect to division of labor, respondents in professional programs were twice as likely (80%) as those in graduate or post-doctoral programs (40%) to report that their partners were primary caregivers. This discrepancy may reflect greater schedule flexibility of graduate and post-doctoral students. However, the majority of professional school respondents were men with female partners, while the PhD and post-doctoral students better represented an even split between genders. It is possible that the observed difference in who identifies as the primary caregiver is more attributable to traditionally assigned gender roles than to the specific demands of different Yale programs. Across both types of programs, female respondents were more likely to identify as primary caregivers of their children.

We did not have a large and diverse enough sample to draw conclusions, but we suspect that the occupations of respondents’ partners may have further factored into the division and negotiation of labor. For example, the three respondents in student-student households who were primary caregivers, or had an equal division with their partners, were also all women with male partners. It remains unclear whether having a student partner provides increased flexibility in dividing childcare responsibilities, and/or if female student-parents are more likely to enroll in graduate school if their partners are also students. It’s also possible that female professional students might delay childbearing until completing school, further reducing the number of women in professional school with children, and possibly skewing our gender ratios. The partners of professional school respondents who were primary caregivers all held occupations other than students, and were all female. We didn’t see a similar correlation in a mixed gender sample of graduate and post-doctoral students whose partners held occupations other than students.

In undertaking this project, we expected more professional students than graduate students to report that their partners did the majority of the childcare, due to the less flexible schedules characteristic of Law and Medical School. To some extent, we did observe this pattern, although it was not clear if it was attributable to differences between graduate and professional school. In fact, several respondents reported that Yale Law School’s many parenting resources for students created an environment that made parenting and academics relatively compatible. Graduate students also reported accessible support and resources, but medical students did not highlight this aspect of their experience.

Throughout this project, it proved difficult to tease apart gender and the associated “traditional” roles of mothering from other factors that also likely contribute to domestic divisions of labor. Still, it is important to understand why parenting and education opportunities are not made available to everyone. Even in 2017, we are far from a progressive world of egalitarian childcare responsibilities, especially when additional educational responsibilities are in play. We believe this egalitarian world is possible, but we have work to do. Let’s get started.

The authors are seniors at Yale College studying Anthropology, Sociology, and American Studies. The research project discussed in this post was completed as part of an Ethnopediatrics class, taught in the Spring of 2017 by Dr. Claudia Valeggia and Dr. Melanie Martin, Yale University Department of Anthropology.

Bowdoin College’s Department of Sociology and Anthropology invites applications for a tenure-track faculty appointment in Anthropology at the Assistant Professor level beginning fall 2018. We seek a cultural anthropologist whose research focuses on issues of indigeneity, sovereignty, the environment, and/or media in Native American or other indigenous communities. We are especially interested in candidates whose areas of geographic and topical specialization complement and broaden those now covered in the Department.