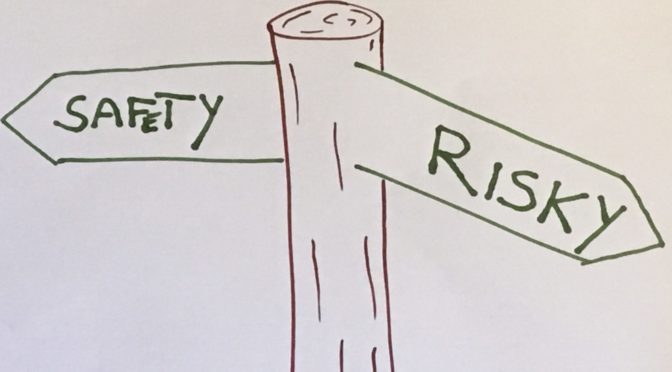 “Risky Play” has been finding its way back into the mainstream discussion – some arguing in favor of pushing back against overly safe environments that lack experiential learning opportunities for risk management. As anthropologists (other disciplines and professions as well!) that work with children and youth, we should be quick to raise a red flag: this is a topic ripe for empirical inquiry, not just idealized beliefs. We would like to invite you, dear ACYIG community, to weigh in on the subject in our first blog module with a series of blog posts on the subject of “Risky Play.”

An introductory blog post poses some possible lines of investigation – questions that anthropology and other social sciences are well- suited to answer – and some preliminary thoughts on the subject by Scarlett Eisenhauer and Dori Beeler.  Elisa (EJ) Sobo (SDSU) invites us to consider children and youth involvement in online communities, conspiracy theories and can invite us to ask how far-reaching risk might be. Additionally, Julia Fleming reviews a documentary film “The Land” to weigh in on the issue.

We invite our readers to engage in this module and look forward to a continuing discussion on the subject with both formal and informal responses, comments, thoughts, and data interpretations!

Imagine an expansive outdoor space dedicated solely to child’s unadulterated play. It is by no means contemporary or state of the art: it is just a portion of hilly, muddy land with a small stream running through it, confined by a tall wooden fence. An abundance of objects intended for the entertainment of children are scattered around. These objects, however, are not the typical objects you would think of when you think of outdoor children’s play. They are unconventional, seemingly random items, ranging from metal shelters, to an old rowboat, to cardboard, to manikins, and much more. This space exists in Wales, and it is called The Land. It is one of the hundreds of “adventure playgrounds” that can be found throughout the United Kingdom and Europe.  A group of filmmakers found interest in this specific adventure playground, decided to make a documentary about it, and aptly named “The Land”. This film offers an intimate perspective on the spontaneous, risky play that is encouraged at the playground.

It also addresses many stimulating issues, such as “What should play be?” and “Is risk necessary for a child’s development?” The film made me reconsider what I previously thought about risk in child’s play. It helped me realize that personally, I think children are very protected, perhaps too protected, when it comes to play, risk, and exploration here in the United States, and that this should change.

END_OF_DOCUMENT_TOKEN_TO_BE_REPLACED

Risky play is in… again! Or so some headlines would have us believe. A recent article by Ellen Barry (2018) describes “danger” intentionally left on a playground in England to allow children and youth to actively face risk and learn from that experience. The underlying theory being that if children cannot experience risk then they cannot learn to deal with it effectively on their own.

It reminded me of the popular Swedish story “Ronja, the Robbers Daughter” by Astrid Lindgren. As she grows, Ronja has to learn how to live in the forest. She has the following dialogue with her father before leaving her home castle to go learn (roughly translated):

Father: Beware of getting lost in the forest.

Ronja: What do I do, if I get lost in the forest?

Father: Then you look for the correct path.

Father: And be careful not to fall into the river.

Ronja: What do I do, if I fall into the river?

This dialogue continues for a while. Once Ronja is in the forest she scampers off only to actively look for these environmental realities, such as the river, so she can beware of it. The narrative in this story, read and watched in movie form by many children in Europe, reflects the narrative of the risky play “revival” by Barry – that in order to learn to deal with inherent risks in one’s environment, one must confront them, even as a child.