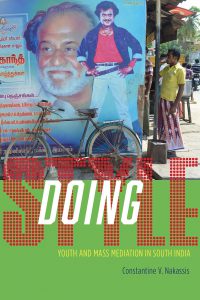 In Doing Style, Constantine V. Nakassis explores the world of youth and mass media in South India, where what Tamil youth call “style” anchors their day-to-day lives and media worlds. Through intimate ethnographic descriptions of college life in Tamil Nadu, Nakassis explores the complex ways that acts and objects of style such as brand fashion, English slang, and film representations express the multiple desires and anxieties of this generation, who live in the shadow of the promise of global modernity.
As Nakassis shows, while signs of the global, modern world are everywhere in post-liberalization India, for most of these young people this world is still very distant—a paradox that results in youth’s profound sense of being in between. This in-betweenness manifests itself in the ambivalent quality of style, the ways in which stylish objects are necessarily marked as counterfeit, mixed, or ironical. In order to show how this in-betweenness materializes in particular media, Nakassis explores the entanglements between youth peer groups and the sites where such stylish media objects are produced, arguing that these entanglements deeply condition the production and circulation of the media objects themselves. The result is an important and timely look at the tremendous forces of youth culture, globalization, and mass media as they interact in the vibrancy of a rapidly changing India.
Alexander S. Dent, George Washington University
“Doing Style posits a compelling theory of youth culture that draws upon the notions of performativity and interdiscursivity. Brimming with sharp theorizing and creative arguments, it will have an important impact on the study of youth culture, South India, film, code-switching, and fashion across disciplines in the social sciences and humanities. Bravo.”
Webb Keane, University of Michigan
“Nakassis’s ambitious volume shows the deep insights into politics and economics that careful attention to everyday sociality can yield. The result is both a tour de force of semiotic analysis and a poignant account of lives immersed in the world of mass media and consumerism.”
Brian Larkin, Columbia University
“In this imaginative and original work, Nakassis provides a radical new way of thinking about cinema, commodification, and style in Tamil youth culture. This is achieved through a close analysis of the performative work of citation—how youths constantly borrow from film culture just as films themselves are pastiches of other films and ordinary life. Theoretically innovative and ethnographically rich, the book demonstrates convincingly the cinematic quality of daily life and the endless play with identity that citation affords.”
The University of Chicago Press
Amazon
You can read the introduction of the book, and here is an interview with Ilana Gershon about the book.