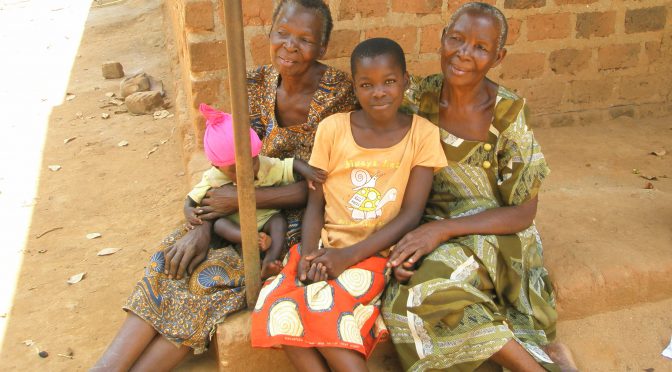 “They are my daughter’s blood. I couldn’t watch my blood suffer,” an elderly grandmother in Uganda told me. She was referring to her daughter’s four orphaned children, explaining why she refused to allow the children to go live with their father’s clan – the clan that is traditionally responsible for the upbringing of orphaned children.

In my forthcoming ethnography, Crying for Our Elders: African Orphanhood in the Age of HIV/AIDS (Cheney 2017), an intergenerational, life-course approach helped me examine the way AIDS orphanhood has influenced child circulation and dynamic processes of kinship construction in Uganda. I trace the sometimes-contradictory social, economic, and emotional effects of orphan circulation within and across family networks, highlighting orphaned children’s concerns with identity that prompt intra-family mobility as they grow into adulthood. In doing so, I show how orphan care in the age of HIV/AIDS is consequently transforming both fosterage practices and kin obligation, potentially jeopardizing children’s well-being and their ability to identify with the “blood ties” that still form powerful tropes of relatedness for them – in spite of, and sometimes because of, AIDS’ tainting of “blood.”

For example, some scholars have observed that AIDS orphanhood is changing kin and care dynamics from “voluntary” to “crisis” fostering (Aspaas 1999; Oleke et al. 2005); but I also noted a waning of paternal kin obligation, just when it was needed most. Though the jaaja, or grandmother, quoted above turned down paternal relatives who asked to take care of their grandchildren, many other maternal relatives found themselves burdened with the task of raising double orphans (those who had lost both parents) when paternal kin refused responsibility for them. This is one factor that may contribute to the feminization of poverty in rural Africa (Kabadaki 2001), with female-headed households having become one of the biggest indicators of child poverty (Fussell and Greene 2002: 47).

Despite this earlier rejection, however, adolescents often expressed a desire to return to their father’s side so they would “know their blood”– sometimes at the behest of patrilineal kin who, despite having previously been absent from their lives, sometimes returned to make claims on their kin. Girls are often treasured by the clan for the bride price they can bring in once they marry, but clan identification was especially important for boys coming of age – not merely for purposes of establishing their identities but for the ways that clan recognition would later enable them to inherit family resources that move through the male line. Orphans thus shifted over time from matrilineal kin’s homes in early childhood to patrilineal kin’s homes in adolescence.

In this instance, “blood” is mainly operationalized in the life course by acting as a magnet to draw “its own” back to the clan over time. As a tie that binds children to their patrilineage, blood – despite its potential to act destructively as a carrier of pathogens – is also seen as a substance that immutably binds people in kin relations.

Though very young and/or newly orphaned children might have little say in their household placement, orphans’ choices to go live with paternal kin in adolescence reflect their active engagement in constructing their own notions of “home” over the life course. Otherwise, they are at more risk of being considered “rootless” by virtue of their orphanhood. This decision is therefore respected, as it also fulfills the normative cultural script of patrilineal association.

Notions of “blood” – and particularly patrilineage – thus continue to play an important symbolic role in orphaned children’s imaginations of “home” and their sense of social belonging in Uganda. Yet the presence of paternal kin in orphaned children’s lives continues waning as more paternal clans relinquish their traditional obligations to absorb orphans – leaving the responsibility to maternal kin who may have less access to community resources. This in turn may leave maternal kin who provide for orphans earlier in life without later support in exchange for having raised those children – thus deepening maternal caregivers’ poverty while also obviating the reciprocal relationships that have historically motivated fosterage.

An intergenerational, life-course perspective can thus reveal how HIV/AIDS influences childhood intergenerational relationships, personal life trajectories, and kin relations over time. It is precisely because these kinship ties are being threatened by AIDS and its related social effects that Ugandans, from orphaned children to their caregivers, emphasize the idiom of blood as an immutable connection with kin in a world of uncertainty. Understanding kinship as a process of imagining as well as material practice thus highlights the contradictory effects of AIDS orphanhood, in which patrilineal “blood’s” pull weakens reciprocity for intergenerational maternal kin care.

Cheney, K. (2017). Crying for Our Elders: African orphanhood in the age of HIV and AIDS. Chicago: The University of Chicago Press.

Kristen E. Cheney is Senior Lecturer of Children and Youth Studies for the International Institute of Social Studies in The Hague, Netherlands. She is the author of Pillars of the Nation: Ugandan Child Citizens and National Development (2007, Chicago). Dr. Cheney was ACYIG’S co-founder and advisory board chair from 2007-13. Her current research concerns the political economy of the ‘orphan industrial complex’ and its implications for child protection in developing countries.