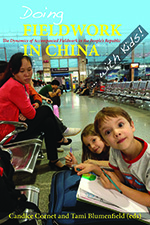 While many anthropologists and other scholars relocate with their families in some way or another during fieldwork periods, this detail is often missing from their writings even though undoubtedly children can have had a major impact on their work. Recognizing that researcher-parents have many choices regarding their children’s presence during fieldwork, this volume explores the many issues of conducting fieldwork with children, generally, and with children in China, specifically. Contributors include well-established scholars who have undertaken fieldwork in China for decades as well as more junior researchers. The book presents the voices of mothers and of fathers, with two particularly innovative pieces that are written by parent–child pairs. The collection as a whole offers a wide range of experiences that question and reflect on methodological issues related to fieldwork, including objectivity, cultural relativism, relationships in the field and positionality. The chapters also recount how accompanied fieldwork can offer unexpected ethnographic insights. An appendix alerts future fieldworking parents to particular pitfalls of accompanied fieldwork and suggests ways to avoid these.