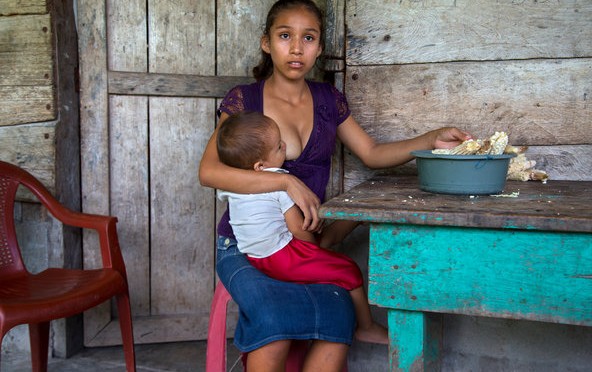 By Briana Nichols and Lisette Farias

The following is a dialogue between cultural-linguistic anthropology and critical occupational science written by two PhD students working in Guatemala.

Briana: What initially struck me about the image was her vacant stare.  The caption below the photograph explains, “Aracely was 11 when she married her husband, who was 34. Now 15, she is raising her son on her own.”  We see a girl, seated, her blue jean skirt, purple shirt, and her toddler son’s red shorts brilliantly contrast the weathered wooden shack behind her. With her son on her lap, she prepares corn. And perhaps intended to be most shocking to the non-Guatemalan viewer, she is breastfeeding.

So what are we, the western, global north, New York Times consumer, supposed to understand from this image?  What emotions is it meant to evoke?  What is made visible, and what is obscured when images of the “developing world” are published for outside, selectively contextualized consumption?

This photograph is one of fifteen in the “Child, Bride, Mother” exposé “documenting the issue of Child marriage” in Guatemala.  It is part of a larger transmedia project, “investigating: the world of prearranged child marriage,” by photojournalist Stephanie Sinclair entitled “Too Young to Wed”(Sinclair directs a non-profit organization by the same name).

As an anthropology PhD student working in Guatemala, I wonder about the power of the outsider, myself included, in the representation of the other, the unfamiliar, the shocking. When a photojournalist chooses to focus on child marriage, the subjects of her photographs are presented within that specific framing—a framing situated in discourses of childhood, human rights, and victimization. We often take for granted the nature of childhood, its implicit innocence, and the inherent need to protect children as vulnerable and non-agentive social beings (Bluebond-Langner and Korbin 2007; Poretti et al. 2014; Rosen 2007).  Fassin (2013) demonstrates how this global rhetoric of childhood is often viewed as common sense, despite its historically constructed and culturally situated nature. With this naturalization comes a legitimization of vulnerability, rendering children as the only “pure victims” and eclipsing the realities of sweeping structural violence and inequity.