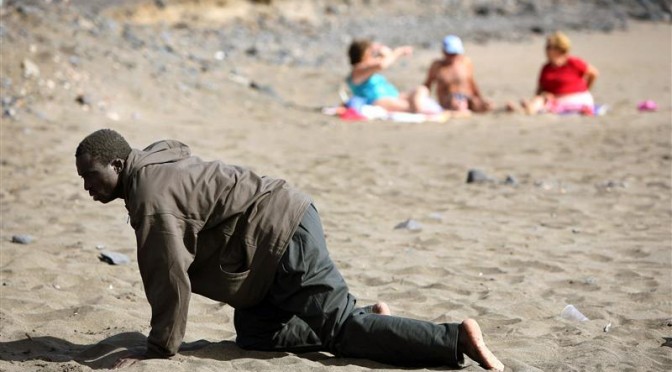 “Images are not just a particular kind of sign, but something like an actor on the historical stage, a presence or character endowed with legendary status, a history that parallels and participates in the stories we tell ourselves about our own evolution”– (W. J. T. Mitchell 1984, 504)

Media representations are powerful. Not only do they embody the appealing veneer of journalistic impartiality, which seems to objectively reflect world in unadulterated ways, but also they help to generate public opinion and thus create consensus when crafting and mobilizing particular policy responses.

Such an image-policy nexus is exemplified in the hyper-mediatized phenomenon of clandestine migration out of West Africa during 2006 and 2007. While the Western route was effectively crippled by the implementation of border controls and surveillance technologies, the images we see today of boat migrants leaving North African shores bear a striking similarity to those circulated nearly a decade ago.

In order to highlight the productive relationship between image and policy, this photo essay explores some of the visual and rhetorical representations of West African boat migrants that circulated widely in the European and American press during what was called a “wave” of clandestine arrivals in the Canary Islands.   …read more on the Youth Circulations blog.